1910-1918 – The first Greek immigrants arrived on Cape Cod. Their spiritual needs were served by the priest of the church in New Bedford who would come to the Cape occasionally on Saturdays. The first Greek school teacher was Nicholas Papageorge who taught from1928 to 1931.

1947 – The Bishop of Boston and Dean of our seminary, Athenagoras Cavadas, officiated at services in the Grange Hall and encouraged the people to organize a community.

On March 27, 1948 a meeting of the Greek community was held to organize and establish a church at the Column Terrace (today’s Falmouth Nursing Home). This church was organized on January 21, 1949 and Rev. Spyros Mourikis was appointed as priest of the community where he served until June 30, 1991.

February 1949 – Fr. Parthenios Komnios, as the Archdiocesan representative, presented the Archdiocese’s By-Laws at an assembly and they were unanimously accepted.

October 16, 1949 – The first Parish Council was elected and its first president was James R. Pazakis.

On March 20, 1949, the Ladies Philoptochos chapter was organized and Mary Sethares was the 1st president. In November 1949, Mrs. Effie Arfanis became Philoptochos’ sponsor, bestowing “St. Katherine” as Patron of the Society.

In April 1950, Mr. George Dedopoulos became the sponsor of our church and bestowed the name of “St. George.”

In 1954, land for a Greek cemetery was purchased in Centerville, Massachusetts. Plans changed when the Town of Barnstable extended the Mosswood Cemetery in Cotuit and offered lots to all residents.

October 15, 1978 – The relocation & construction of the new church complex was approved at a special General Assembly. Ground-breaking ceremonies, officiated by His Eminence Archbishop Iakovos, were celebrated on June 3, 1979. Construction began in Oct. 1980.

On June 20-21, 1981 the THYRANOIXIA (opening of the church doors) was celebrated with Bishop Anthimos of Boston celebrating.

On October 8 & 9, 1988 Archbishop Iakovos consecrated the new church assisted by His Grace Bishop Methodios of Boston.

On July 1, 1991, the community welcomed its new priest, Rev. Fr. Panagiotis K. Giannakopoulos, Presbytera Paula and their two children, Simela-Niki and Constantine Nicholas. Fr. Peter arrived from the Holy Trinity of Fitchburg, MA where he served for five and half years. Fr. Peter served his first assignment of two years at the Holy Trinity of Chicago, IL and later at St. Sophia, Faith, Hope and Love in Elgin, IL, for four and half years.

Fr. Peter was born in Keratsinion, Piraeus, Greece, on October 10, 1949. With the assistance of the Parish Council members and the parishioners, several projects were immediately undertaken by Father Peter. Repairs to the church and our entire roofing system, the change of the heating system from electric to gas, a new climate control system and correction of the air conditioning in the community center were realized. With financial assistance from Philoptochos, the community center was upgraded with beautiful Greek columns, decorative molding and two-tone coloring. The enhancements were then executed and finalized by Mr. George Moudouris and Mr. Costas Tsoleridis who painted the hall, both donating their services.

With the help of architect, Sevy Strekalovsky, our church received a new look. The 120 circular windows were replaced with seven 3′ x 5′ arched thermo pane windows on each side, adorned by Byzantine iconography and angels from the Monastery of Chora, Constantinople, executed with great faithfulness to detail and tradition by Mr. Michael Martino and his studio in Framingham, MA. A copy of one of our windows depicting a green angel was donated by Mr. Martino to Patriarch Bartholomew I on his first pastoral visit to America. A total of twenty-eight large windows adorn the interior of our church complimenting the beautiful Byzantine Iconography along with the other front circular windows that were also replaced.

Donations of church artifacts and embroidery from parishioners have been generous. The project brought about successfully the conversion of two acres into our new parking lot facilities, and a park area utilizing the Botsey family endowment to our church. Additionally, many parishioners have made donations towards our ongoing beautification program of the church grounds. This project was under the capable guidance of Mr. Gregory Straticoglou who did the work for our new parking facilities and park areas.

On October 1997, a very ambitious effort was adopted by the Parish Council and the Finance Committee. The plan was to eliminate the church mortgage of $142,820 in three years. The Finance Committee introduced a matching plan and through some generous donors raised $62,000 in matching funds. The miracle is that in less than two years, we were able to retire the church mortgage and thanks to the great love and generosity of all who contributed; the parish has done the impossible.

As the community has grown, its needs have also been redefined. One of our great areas of need has been storage. Mr. Angelo Kaldis and his brother Elias donated their services in building a large shed behind the church. This gave us the needed space to store all our festival equipment; thus, providing additional space in our community center for an activity room for our youth. Through the expertise of Mr. Gregory Racheotes, the room has become functional and attractive.

The Fall of 2002 brought structural changes and repairs to the front and back rotting arches of the church.

In 2005, the interior iconography of the church was washed and the renowned iconographer, George Kopsidas, his wife Angie and their son John from Greece repainted, by hand, the entire background, giving it an antique look and truly revitalizing the whole iconographic richness of the church. Mr. Spiros Balodimas generously provided the scaffolding used by the iconographer. 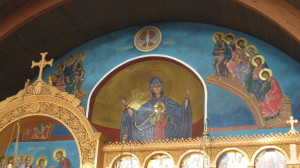 When the Fire Department directed us to clear the passage in the side sacristy and provide a proper exit passage, it became urgent and apparent some remodeling was necessary.  This project was afforded by the directiion of generous donations from Mrs. Joyce Haseotes and Mr. and Mrs. Chris and Maria Alex as well as the most generous stewardship of time and talent of Mr. Angelo Kaldis and Mr. Igor Janev and the design of Presvytera Paula Giannakopoulos.  Together, with the skillful masterwork of the above, the old storage and closet space was transformed into an elegant, functional and plentiful new area for the altar boys with a space to cut the bread.  Also, plenty of storage for the baptismal font and robes was created along with a new bathroom and sink which became a very useful addition. In 2007, the total gift of $125,000 ($100,000 from the estate of Mr. Marius Dimitrakis and $25,000 from Mrs. Ann Dimitrakis) was presented to the November General Assembly which overwhelmingly accepted the gift along with the family’s request that we use it to build a new narthex.  Mr. & Mrs. George Dimitrakis of Arlington and Mr. John Dimitrakis allocated the funds to expand the front of the church with the addition of a narthex. Contractor de Martin Building & Remodeling LLC of Falmouth was granted the bid. The entrance includes a connector into the back office, five stained glass windows, all of which were donated by parishioners. a copper roof, and new wood carved front doors.  A cry room was also included in the renovations.  Outside of the front doors are memorial gardens which were offered by some of the funds left from the Betty Tsanggos bequest.

In addition to this new construction in the front of the church, a much-needed walk-in cooler/freezer along with an additional storage room was constructed off of the kitchen at the back of the church.

2009 marked St. George’s 60th year as well as the anniversary of Father Peter’s ordination to the diaconate and the Holy Priesthood, his 60th birthday and furthermore his 30th wedding anniversary. In 2013, the new narthex was iconographed by the love and generosity of our parishioners and by the most capable iconographer George Kopsidas who surpassed himself with some original masterpieces.

St. George Greek Orthodox Church of Cape Cod has indeed been an active community wherein the work of Christ and His Church is actively pursued by the many talented and dedicated parishioners who strive to promote their faith, culture and traditions. Thus our life at St. George and our involvement in the larger community through our annual Greek Festival, in conjunction with the numerous activities and events by all the groups and organizations, proudly reflects our life in Christ and the church. We have been blessed with 65  years of Christian living. As we face the third millennium, we hope and pray that with God’s help, we will continue to grow and prosper in faith and in all areas of our life with harmony, unity and concord!